Jagaraga Singaraja Temple: A Temple With A High Aesthetic Value 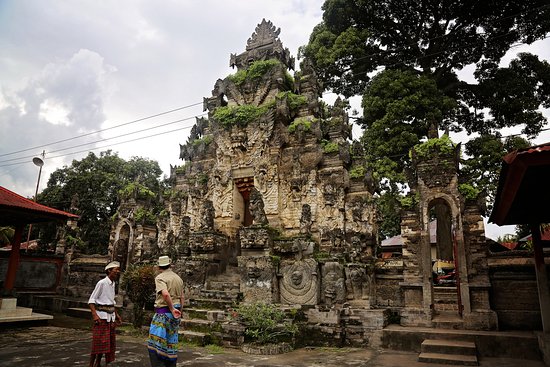 Pura Dalem Jagaraga is one of the most attractive temples in Bali. Some of the uniqueness that we can see in the environment Pura Jagaraga among them have relief carvings on the front wall. The reliefs depict ancient aircraft battles, armed robberies, boats, and people drinking beer. No less interesting is the Statue of Men Branyut, the famous folklore depicting a family that has too many children and is portrayed as the grief of this old man is full of humor.

It is said that King Buleleng I Gusti Made Karangasem and his followers as well
headquartered in Pura Dalem during the battle. Solid defense when it was also reinforced by a troupe of locusts coordinated by Jero Jempiring. A woman, patriotic patih wife, brave and courageous fighter.
Her role and contribution to the Bali victory in War Jagaraga I was enormous, causing the Patel Jelantik fortification strategy to live and function well at that time.

Pura Dalem Jagaraga whose piodalan falls every Umanis Kuningan, wuku Langkir is part of Pura Kahyangan Tiga in Jagaraga Village. The place is opposite the road with the grave (setra). This temple faces to the West. The site or its site extends from west to east. The yard of the temple is lined with panyengker walls around it. On the jaba side before entering the middle jaba there are brackets or kori brackets typical of the shape and variety of hiasnya. Relief or pepatraan it is very authentic and has its own characteristics. Liang takikan engraving is not deep, but widen and tend to taper.