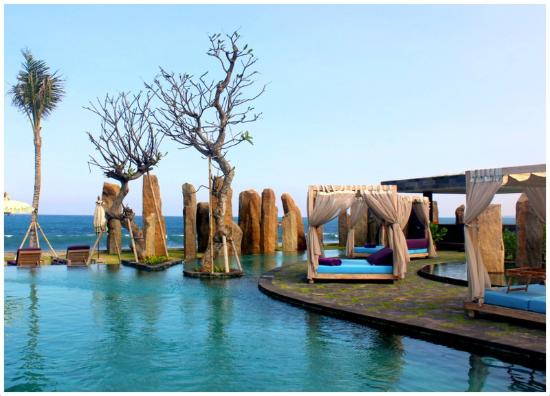 Purnama beach is one of the beaches on the island of Bali which is located in Sukawati, Gianyar. The beach is in full swing new tourist attraction because it has a uniqueness that is not owned other beaches in Bali.

Purnama beach has a beautiful garden that will remind you of Stonehenge in England. Stonehenge is the name for standing stones, here is not just one or two but many of stone. This is actually a pile of stones was actually a shrine commonly used by local communities to put prayer offerings.

Purnama beach could also be the location of a beautiful sunset photo capture. Because the place deserted, and yet many people are coming, so you do not need to be afraid of the moment photo 'destroyed' because passersby. 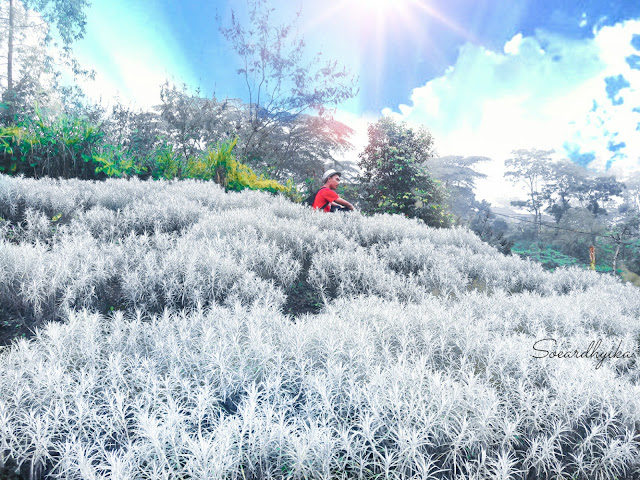 Padang Bunga Kasna is a plant that lives wild in the area of ​​Mount Agung and gradually many people who cultivate the flower. This flower is sold for praying purposes for the Hindus. This Flower Kasna grows fertile in the area of ​​Temukus Village, whose weather is perfect for the growth of this flower. Also in this area there is a refreshing view of the eye, we can see the hill, flower garden.
For those of you who are looking for interesting photo spots, you can try them in this area. You who want to go to this tourist attraction can come at harvest time, or two weeks before Hari Raya Galungan Hindus.
This tourist attraction is located in the Village Temukus, District Rendang, Karangasem, Bali. Since the access road to this tourist attraction is quite difficult, you can find a way to Pura Besakih and look for Temukus Village. From the city of Denpasar you only need about 2 hours to go to this sights. Access road in Temukus Village is small, because it can only be passed by one car onl…

Wanagiri Hidden Hills became a popular tourist attraction in social media, this tour provides stunning natural scenery. This tour has many places you can use as photo material, from swings, bird cages, boat-shaped viewing post, and more. The tour also overlooks Buyan Lake and Tamblingan Lake.
Throughout 2017, Wannagiri Hidden Hill is on the rise. The reason is of course because this tourist attraction has a charm of beauty that can make anyone who sees feeling hypnotized and fall in love.
For those who visit this place, you can also rent a boat to Lake Buyan. Wanagiri Tour is crowded to hundreds of people during the holidays. Admission price to Wanagiri Hidden Hill tours is only Rp.10.000 per person. Located at Jl.Munduk, Wanagiri, Sukasada, Buleleng, Bali. Vacation to this place is perfect for those of you who are looking for instagramable photos. Wanagiri Hidden Hills wisata yang sedang populer di sosial media, wisata ini memberikan pemandangan alam yang sangat memukau.Wisata ini mempu…

Are you a typical Balinese culinary lover? Or curious about the culinary Bali that is hits? You need to try Blayag. In contrast to the tipat in general, Tipat Blayag has a unique taste. The mixture of sauce is similar to curry, ketupat, egg, toge, hot sauce and fried soy beans. You will not be able to get through a mixture of savory, spicy, and sweet taste in one culinary that is mushrooming in various areas in Bali.

Tipat Blayag comes from the District of Buleleng precisely Pengelatan Village. Typical already known in Buleleng is then widely circulated in areas outside Buleleng. Even breakfast with Tipat Blayag can be your favorite menu. Usually Typhoon Blayag sold Rp 7,000 to Rp 10,000