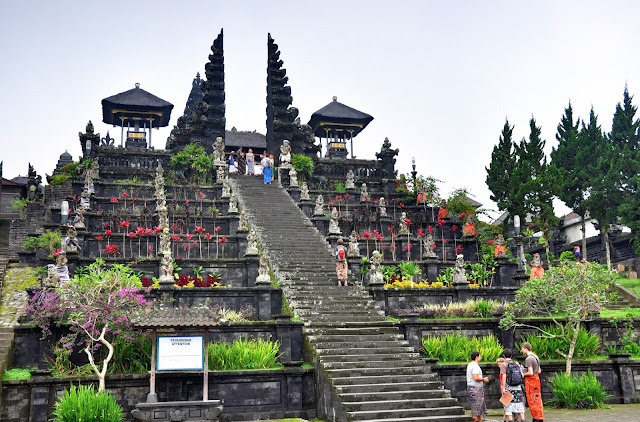 Besakih temple is estimated to begin to be built around AD 163 by Rsi Markandeya, an Indian magic hermit who previously settled on Mount Rawang (Mount Raung). At the time of his imprisonment at Mount Hyang (Mount Dieng) he received revelations for him and his followers totaling about 8000 people to travel eastward.

On the first journey, he and his followers had many obstacles such as seeds of disease and wild animals. His journey stopped to return to beg for His guidance. Finally he resumed his journey but this time begins with Yadnya offerings to God as ruler of the universe. Since that time also the Balinese people do Yadnya in everyday activities.

The place where the forest was started by Sang Rsi / Yogi Markandya planted a jar of water with 5 types of metal: gold, silver, copper, bronze and iron called Panca Datu and gem Mirahadi (main mirah) with upakara More and sprinkled Tirta Pangentas (holy water). The place to plant 5 types of metal was named Basuki which means survived. It is said that the name was chosen because at the arrival of Rsi Markandya the second and his 4000 followers survived not encountered obstacles or disaster as experienced at the time of his first arrival. Place was then established palinggih. Gradually in place then established a temple or khayangan named Basukian Temple or Besakih Temple.