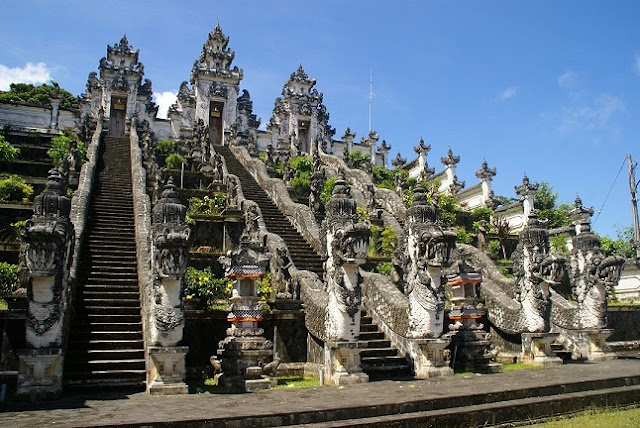 Lempuyang Luhur Temple is located in Puncak Bukit Bibis or Mount Lempuyang, precisely in the village of the district Purahayu Abang, Karangasem. This temple is believed to include the oldest presence in Bali. There have even been in pre - Hindu-Buddhist. Original sacred building made of stone. The god who reside here, namely Gni Jaya or Dewa Hyang Iswara.

There is an interesting information that would be sufficient. Based on the shooting of outer space, on the eastern tip of Bali appears very bright light. The brightest rays than other parts. But not known exactly where the rays of the region, but is thought of Gunung Lempuyang.

Lempuyang derived from the word 'light' which means light and 'hyang' to refer to God. Of the word lempuyang interpreted God's holy light bright. There is also another version that says lempuyang is a plant that is used spices. It also is associated with the banjo around Lempuyang namely Bajar Bangle and gamongan. Bangle and gamongan similar plants used as herbal and spice. Another version there is also a mention lempuyang derived from the word 'master' or 'Emong' which means keeping. Batara Hyang Pasupati sent down to cuddle her three sons in order to maintain the stability of Bali from various shocks of natural disasters.